The Chairperson opened the AGM and thanked everyone for coming

The outgoing Chairperson, Lesley Jarvis, confirmed her resignation after 10 years in office. The committee are extremely grateful for all her hard work and dedication to the continued improvement of the pool facilities. Lesley was presented with a bouquet of flowers from the committee.
Lesley confirmed the resignation of the following committee members and thanked them for their support over the years.

The committee would like to thank Colin in particular, for all his hard work and considerable time spent in updating the pool facilities.

The committee unanimously approved the above appointments and formally welcomed them to the team. The Association has significant challenges over the coming years and our new committee members will be invaluable in achieving our aims.  John Jarvis will bring considerable expertise as Chairman of the committee, drawing on his previous experience as a Quantity Surveyor and expert witness to oversee the proposed refurbishment and lease negotiation.

Peter Brigham, Carol Luscombe and Lesley Jarvis will continue to help out with technical duties when needed.

There will be no supervision secretary and each session will continue to run with its own shift leaders as this worked successfully last season.

Johanne Harrow informed the committee that she will be away for 6 weeks during the summer and will need somebody to take over tuck shop responsibility during that time.

The following report was read by the chairperson, Lesley Jarvis.

Good evening everyone and thanks for coming.  It’s nice to see so many friendly faces who have supported us for years.  On this, my last report as Chair Person, I would like to thank everyone on the committee, past and present, who have been such a support to me over the last 10 years.
Not least of these has been Sharon.  We joined at the same time 20 years ago when the pool was desperately in need of some investment and technical know-how after the previous pool technician left. I remember an afternoon session when the water was so green it was impossible to see under.  All the kids could have drowned and we wouldn’t have known! We took on the task of turning the pool around, despite having no previous knowledge and regularly stalked various pool companies until we had a proper understanding of what was needed and gradually the pool transformed! Along with loads of help from Peter and Carol, we spent many hours perfecting the art of pool water chemistry and embarked on formal pool plant training which is regularly refreshed.  Latterly Richard has been a welcome addition to the team, helping to lighten the load.
Peter has been the pool technical wizard for over 40 years and has kept the pool and plant room repaired and in good order with help from Colin who has also been heavily involved with many projects at the pool over the years.  Peter and Colin have undertaken and overseen numerous improvements at the pool, including refurbishment of the changing rooms and toilets, with Colin regularly using his persuasive skills to blag discounts, labour and free materials!  Although Peter supposedly retired from the committee last year, he is still around and we couldn’t manage without him!
John Humphreys was treasurer for many years and my particular favourite on Saturday morning sessions when he would keep the members and supervisors entertained and on their toes.  I still miss John and Saturdays, although still a fun family morning, are not quite the same! (although he does sometimes come to the pool to make sure we are behaving ourselves!)
This year has seen record numbers of members again. Sandra and Jeannine oversaw the installation of an online booking system which has been a great success and has helped enormously with time saved in processing membership applications.


Along with the increase in membership, the pool has seen many organisations using the pool including several schools, scouts, brownies, cubs, beavers, visually impaired people, teenage training, early birds and adult swimming sessions as well as pool parties on most Saturday afternoons.  We have become almost too successful as we have a problem getting supervisors to cover some of these sessions.
These record numbers of members and usage have created an additional strain on the pool and now necessitates a refurbishment of the pool plant room and sundry other works expected to cost in excess of £60000.  This is a huge amount of money for a small charity to raise but we have done an amazing job raising funds with some very successful fundraising events this season.  The 50th birthday party organised by Sandra and her team was a massive success as were the evening swim and extended session to count the ‘Spend A Penny’ money.
It was a great disappointment to me and the rest of the committee that we were unable to do our planned refurbishment after this season closed. Various factors have delayed our plans, including our lease renewal but the overriding priority is to make sure we get the right pool water system in place for our needs which will serve the pool for many years to come.  We have money promised by Polehampton Trust and Twyford Parish Council as well as grants from Ruscombe PC, Charvil PC and Baylis Trust and we will continue to raise funds so that we are ready at the end of next season to begin the refurbishment.
Thanks to Marianne who is retiring as Treasurer for a great job in keeping the accounts and to Colin who is retiring from technical duties although they will still be involved in the early bird sessions next year.  Thanks again to everyone on the committee and all the supervisors and backroom staff for all the work that you do, we couldn’t run the pool without you.
So that’s me done.  I will continue with some supervision and anything else needed but my health means I need to take a back seat now. I wish my successor all the best and he or she will have the help of the best committee around and I am confident that the pool will go from strength to strength.
Everyone can have a short rest now until after Christmas when the madness starts again. I am looking forward to actually having time for a swim next year and to seeing all the friends I have made over the years! 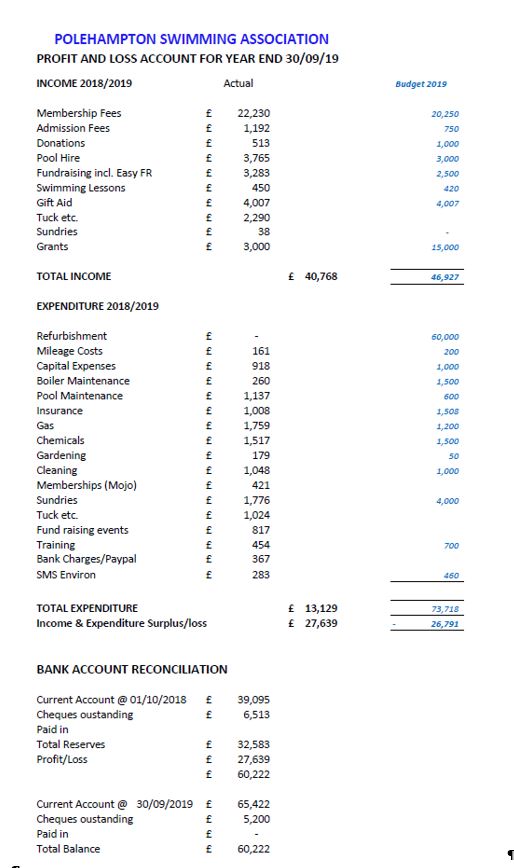 ​Treasurer reported that net profit was £27639 for the period ending 30/9/19
£22230 related to membership fees. Gift aid shown is for previous year.  HMRC rules have changed and we can no longer claim gift aid on membership fees.

Bank balance is £65422. Allowing for uncleared items we will carry forward approx. 60K.. (£30,000 is held in a deposit account. Further transfer to be made.
Richard Winterburn suggested that the split between the current and deposit accounts is shown on the P&L account in future.

Lesley Jarvis confirmed that some of the grant money promised hasn’t been drawn on yet but she will ask for the money to be deferred pending the refurbishment.

The following technical report was read by Peter Brigham:-


This year the Season has been unusual in that it has been fairly quiet on the maintenance side.  The previous 4 years have seen us carrying out major improvements to the pool surround, changing rooms, toilets and kitchen area so we were thankful for the rest!

Our boiler didn’t miss a beat and is well maintained by Neil Lamb our boiler expert.  However, the unit will be 12 years old in April 2020 and we should be aware that it could need replacing in the near future.

There were also relatively minor repairs to the mosaics in the pool structure this year as we are due for a major refurbishment programme starting Autumn 2020 which includes work to the pool itself.
In January we obtained quotations from various contractors for the work to commence this Autumn 2019.  However, there was a vital hurdle to overcome which centred on the renewal of our lease in 2020 before any decisions could be made.  Choosing the right contractor and pool water system is vital to ensure that the pool can meet current and future bather loads.  Therefore, the refurbishment will concentrate on installing the right technology to increase pool water turnover and improve filtration and water quality.  Ultimately, we hope to invest in an ultra violet sanitiser and chemical auto-dosing which should reduce the amount of chemicals we use, providing a cost saving for future years.

Before our season opened on May 4th the usual tasks were carried out including:-

Remove winter cover, pool water treatment and water balance, fixed wiring testing, megaflow service, and cleaning all areas.  The summer proved to be a little erratic but the pool was still very busy creating huge pressure on the technical team.  As usual, the team did a great job in keeping the pool water clear and sparkling, so many thanks to Carol, Sharon, Richard and Lesley.

Money raised from our fundraising events and the various grants and loans that Lesley has worked so hard to obtain, will help to ensure that we have the financial resources in place to carry out the planned works ahead of our 2021 season.

The following report was submitted by Sandra Fernandes.  See attached document for membership stats. There were 503 family memberships.
(494 paid memberships) 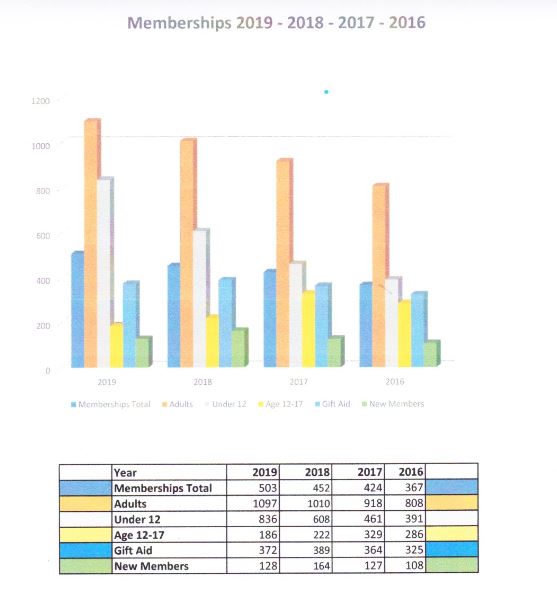 Jeanine Cummings suggested that we no longer accept cash at the pool or through her door. Perhaps we could just accept cheque or card payment to reduce the security risk? Deferred to next meeting for discussion.

Carol Luscombe confirmed that she is happy to continue to coordinate the under-fives session again in 2020 but would need additional help because Rachel Arkell will only be available during the school holidays. Carol reported that signing in each visitor in these sessions is problematic.  Could we sign in block for session? John Jarvis suggested that the Keys Academy may have a new signing in and safeguarding procedure.

The minutes and associated reports need to be uploaded on the website and FB etc.
SS to circulate minutes to those present at the meeting once they have been agreed.

John Jarvis to investigate forming a CIO (Charity Incorporated Organisation) to safeguard the committee. Lengthy process with the Charities commission. Noted that trustees can only serve a max of 9 years under this arrangement.

All policies etc to be reviewed with Chairman early in 2020. (ie Health and safety,
EAP and normal operating procedures, Child protection and constitution etc)

It was agreed to purchase a thank you gift for the site controller by way of thanks for
all of his help during the year. SS dealing